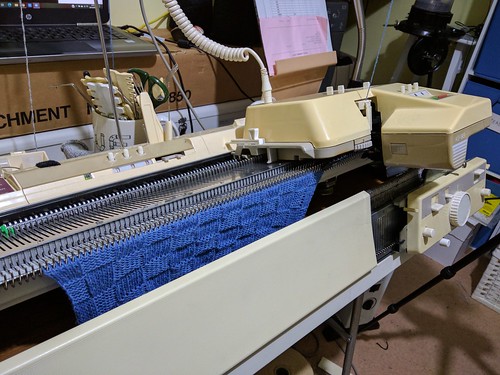 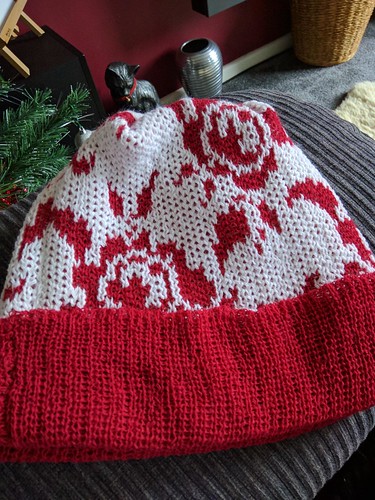 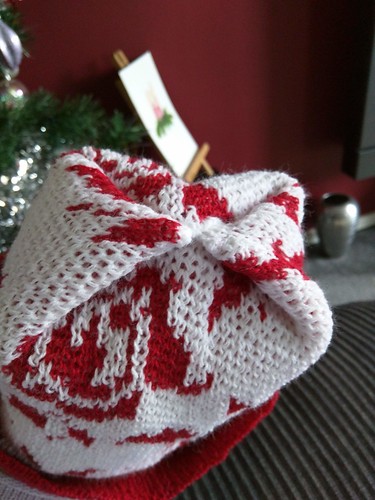 Well, I hope you've had a nice week relaxing. The Cog and I have spent lots of time in front of the tv watching films and enjoying being lazy (rather too lazy but never mind!). Most of the UK suddenly went back into full lockdown as of today, so I got a last minute hair appointment yesterday. A good job too as my fringe was starting to behave like curtains again. I managed to order a new sponge bar for the Brother KH950i before xmas - it arrived in good time, but the Hermes bloke is apparently not keen on ringing the doorbell. It's a good job it was well-wrapped, as the day it arrived, it rained so much there was a lot of localised flooding in the area. It was leaning against the front door - luckily I was in and out emptying bins, so I don't think the tube was outside too long.

As you can see, I've started knitting another MK cowl from this pattern. To start with, stitches were dropping all over the place - I swapped about 6 needles out in the end PLUS the gc needle. Seems my garter carriage doesn't appreciate lots of weight. Tuesday afternoon was very frustrating - I couldn't leave it unattended without having to reform knit stitches every 8 rows - it's a block stitch pattern already in the machine's memory, 6 stitches by 8 rows. Someone posted an odd question on one of the big Ravelry forums recently - something about machine knitting and cheating. As you can imagine, that rather got my dander up, especially as someone else recounted a tale of being denied access to a sales venue where someone else was selling clothing made with sewing machine and serger. If anything, I'd say machine knitting is harder to learn than handknitting. You can easily teach yourself a new stitch pattern, or retrain yourself to knit continental. When the machine plays up, who do you turn to? How do you figure out what's wrong, when there are many more variables?

Yes, I did manage to successfully another hat, and knit the front, back and one sleeve of a very plain jumper yesterday on the Passap - whilst keeping a watchful eye on the garter carriage, which behaved impeccably. I've still one sleeve to go, and then I've to figure out how to join the shoulders and knit the neck on the Passap - that will be a manual operation I've not tried before, but should be ok. The lack of holding position on the Passap is the main bugbear. This one's not cut and sew, so at least that step is skipped. I might write it up as a simple pattern - the yarn is Yeoman Cashmilon, which knits up beautifully at ss5.5 on the E6000 in stocking stitch. You can knit the whole lot on the E6000 with console off, including a round neck (once I figured out how to mimic holding position with LX and no pushers).

I've said it before, and I'll say it again - machine knitting just speeds up the boring bits for me so I get more time to concentrate on the fun bits (patterning, designing, cables etc). Truly creative people will understand that I think. It being a machine it's just as prone to error as the human mind -  in fact, ironing out the bugs - too much weight? Not enough? Did I forget to add the end stitch cams (I did!) - teaches the student patience and forbearance.

With that in mind, if anyone wants to book me for a Zoom 1-2-1 lesson in machine knitting, I am more than happy to try and help. I'm in the GMT time zone and it'll either be weekends or weeknights, £10 for a forty minute zoom call. I can set up my DSLR as a webcam so you will be able to see what I am doing.

Mum has agreed to "bubble" with us, which means she can come for lunch tomorrow - she's widowed and since Grandma passed away I think she's been quite lonely, especially on Sunday afternoon. It's her birthday today, so tomorrow will be a double celebration. I only delayed asking because I didn't want to ask her to choose between my sister and I (sister is more at risk because three of them are in school). The Cog's not very keen - I agree the whole "bubble" thing is rubbish, there is always still a risk, but as we both WFH and Mum is very sensible I think it's minimal. Plus I'm not in the same town as Mum and sister, so they can "doorstep" each other when required.

We'll be having our regular NYE party later - just the Cog and I at home, good telly, beer, nibbles and giggles. Here's to 2021 being better - 2020 can get lost!