When I start hankering after crocheting yet another blanket, when I already have four tucked away in the wardrobe (only really get used for camping), then I know it's time to cast on a new crochet project. I had some leftover cotton (Stylecraft Cotton Classique) used for making a beach bag last year, and thought I'd make another one, but this time with a fancy stitch pattern I was lusting over. Red Heart's Twilight Shells throw is lovely, but why not use the stitch pattern for something I can actually use?
Of course it's now on hold whilst I await the delivery of some extra blue yarn. 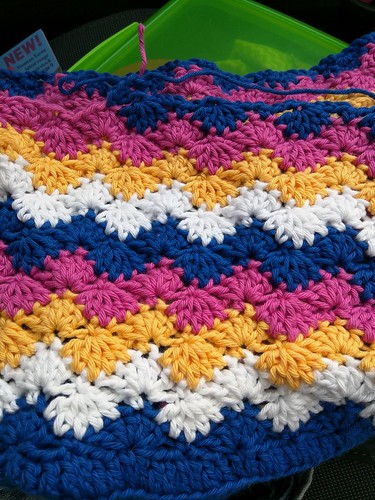 Instead of finishing a lace shawl I knit (knat?) some time ago, with the fiddly knitted-on sawtooth edging I keep dropping stitches in, I cast on for another shawl - the Spring Tulips stole. Managed to lose the pattern so that one is also currently stalled until I reprint the page that I need.

(Picture to follow - it's not THAT exciting so far, only an inch of knitting!)

So last night I cast on a sideways crochet hat, loosely based on this pattern, but for an adult. I made up a ball of "magic yarn" from leftover tapestry yarn from a needlepoint I completed a few weeks ago and clearly forgot to photograph for the blog. It must be real wool because I am replacing the knots with spit joins as I go, so much neater! Because what else does one do, in the middle of a heatwave, but make a warm woolly hat! :) 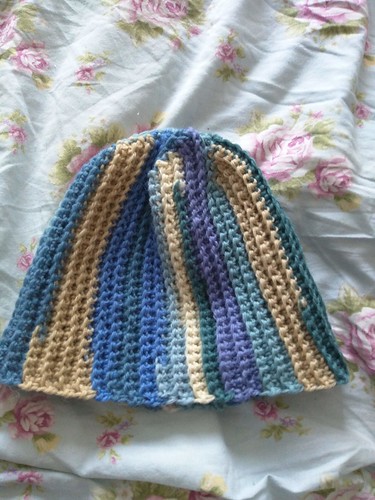 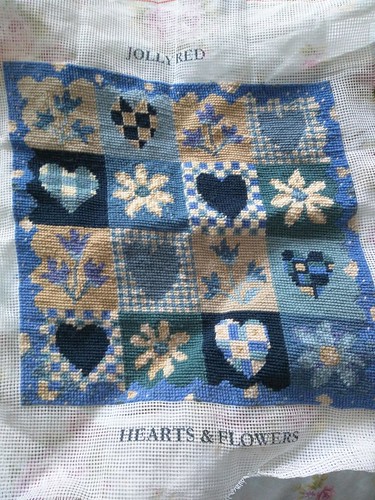 Our cat Eddie has been a bit poorly, he started peeing blood this weekend and after an emergency trip to the vets, a bladder infection was diagnosed. So far he's accepting his adulterated food though I have to watch - with the hot weather, we have windows open and regularly get "mugged" by next door's cat. Oh well, I suppose the traces of cystitis meds probably won't do him any harm. In other news, we decided to change the bedroom light with a fancy chandelier, and managed to fix it so that the upstairs lights kept tripping. I think we should just get a proper sparky in next time, save three days of using the bathroom in the dark!