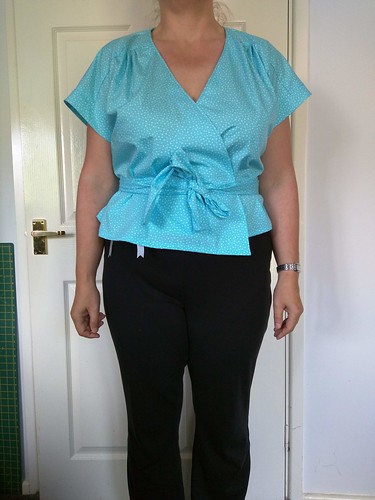 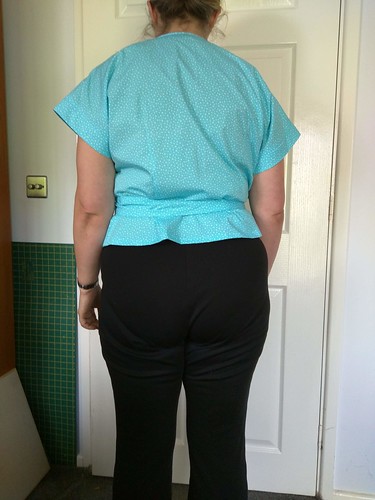 This is pattern New Look K6560 - doing the largest size, and with my bust, it's come up very short on me. It's just printed cotton, a tiny star print. There's no bust shaping other than some small gathers so I made this "as pattern". I've got quite a bit more material, so I am tempted to cut out some straight bits and add some length to it. I cut it out weeks ago and didn't check the paper pattern against myself. Lesson learnt! Think it might work well in a jersey. Or with a LOT more gathers to the front. I'm not keen on this "misses" category - I'm not married, therefore still a miss (I prefer Ms, it's nobody's business but mine!), but definitely nearer to fifty than I would like! And I'm more well padded, and my bust is lower and larger. 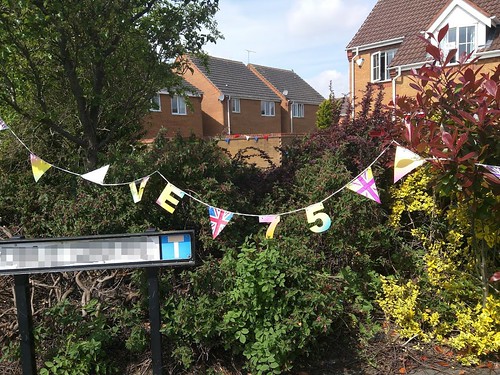 I made some paper bunting from rainbow paper I happened to have, and some children's bunting found online that we coloured in, our printer being low on ink. I crocheted the chain from string. We had a brief socially-distant street party with the neighbours, then a private bbq in the back garden. Felt quite teary singing "We'll meet again" - very poignant this year. Nobody did that on their doorstep here. The weather was glorious though. :) We got a good walk in on Saturday too, and then I knitted in the back garden.

The novelty value of working from home (WFH) has gone now reality has bitten. The Cog's employment is paused until further notice, so my contribution to the household bills has shot up. On the positive side, (a) the petrol money I'm saving will cover quite a bit of it, and (b) it's forced him to move all the bill payments into the joint account, and the email addresses to our joint one, so at least I have visibility of the situation now. If next month is a struggle then I will pause most of my regular savings, because I'll have to. I'm in no way complaining - we are much luckier than a lot of people.

I had a real wobble last week - despite my best efforts, staying in touch with anyone outside of work conversations has been fraught. It's been hard not to take it personally - I have been the one texting, emailing and calling my relatives and friends, not the other way around, and it's challenging not to take that personally when there's little response. When I'm down, it feels as if nobody ever has time for me. I'm trying hard not to think that if I stopped making an effort, it wouldn't happen at all! But the Coventry Knit Wits are now having a weekly video chat on Facebook, and although every Wednesday after work I do feel averse to a further two hours online, I've made the effort. It's actually really nice to keep up with what everyone else is doing, even if knitting-wise I mostly end up playing with the cat off camera. I think Eddie thinks I must be talking to him, he really doesn't get the concept of facetime. A few weeks ago the shock of the whole thing meant all I could concentrate on was some simple garter stitch scarves for the charity pile, and I'm 60% done with the second one. After that, I really should use this time to finish the neverending spiral sock and the other things on that there sidebar.

Some personal tips for WFH: 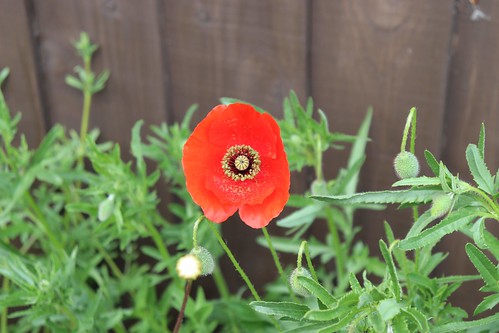 A poppy on VE day - lest we forget indeed.

Email ThisBlogThis!Share to TwitterShare to FacebookShare to Pinterest
Keywords: sewing