FO: One piece of sky 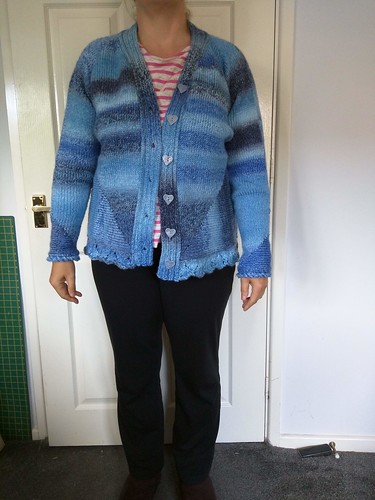 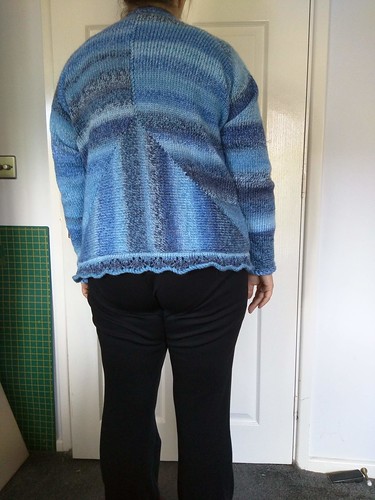 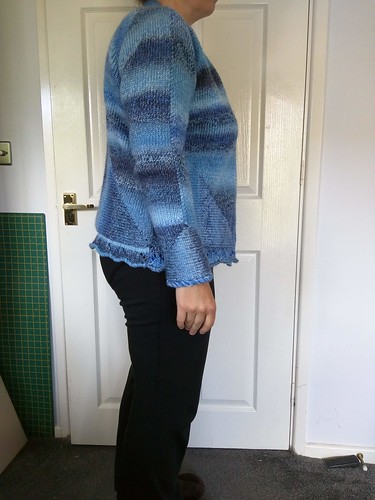 This isn't quite finished - the bands need steaming - but I was desperate to share it online. (Pictures replaced now it's done!) Bob Morley and Bill King kind of jointly gave me this idea - to knit an entire cardigan or jumper in one piece. I calculated the pattern in Knitware using a swatch, as a raglan v-neck sweater. Then I tweaked the figures a little to make it work. The front short-rowing was actually originally meant to bend the other way but I decided I quite liked it as it was in the end.

To work all this out I printed some graph paper from here, based on my tension swatch. Then draw various lines for the angles you want, and see what the stitch and row ratios are. You get different angles in partial knitting depending on the ratio of how many needles are held over how many rows. For almost "square" turns, you need to reduce by 2 needles every 3 rows (it's actually 47 degrees with this yarn's tension and gauge, but what's 2 degrees between friends?). To keep things simple, every time I was on a row that was NOT divisible by 3, I held another needle, until all but 1 were out of work. The needles are then returned into work in the same manner - though you could construct some interesting shapes by NOT keeping to the same ratio!

For the raglan decreases it was 1 needle held every 1 row, so very easy to remember. The sleeve called for increases every 7 rows, so I made it every 6 rows to accomodate the short row turn at the bottom where there is NO shaping - I did try that on my first attempt, but the maths was too complex when you are shortrowing AND decreasing for the first half of the sleeve. So the sleeves are a smidge too long.

After doing two "square" turns, the second half of the sleeve is knitted whilst hanging the first half's edge every two rows, so it is joined as I go. Likewise for the back. There is some casting on and off between the sleeves and body to adjust for the different widths required. It's almost easier to knit than it is to explain. You could add more partial turns to the sleeves and fronts / backs, for peplum effects.

I thought James C Brett marble chunky was perfect for something like this, as it shows off the partial knitting very well. I hope to steam the bands soon and take more photos - WFH means not a lot of ironing is being produced at the moment in this house, and it's a pain to get the ironing board out for just one thing, as it is usually done in the living room and blocks access. My next project is sewing though so I might set the iron up in my craft room for that. I've more of this yarn too, it being a 1kg bag from Uppinghams. There's no reason why you couldn't do this on a standard gauge machine either.

The name is "One piece of sky", because we are all labouring under one piece of sky at the moment, seperate, alone, yet working together for the greater good.

impressed that it fits rather well, given the maths! :)
Posted by steel breeze at 4:30 pm