The apathy continues - we're having a hot, humid summer. Last week at one point it hit 30 degs C in the "office" - I ended up in nothing but undies and a sarong, and was STILL too hot. As himself and I were trying to share one fan, positioned strategically on the landing, but there was no breeze to speak of, I swear my brains were melting round about 3pm. I've picked up a new fan that sits neatly in the window - the angle of the door to this room means I really wasn't getting much benefit from the other one!
Access to my knitting room has been severely limited; the Cog's new contract seems to mean he's on skype most nights 'til gone 7pm, so meals are eaten in silence/alone (hoping that his deadline this week  will mean things calm down soon). Apart from some time spent making videos for the upcoming KCG Unvention (I need to get in there and re-record my intro but the rest are done), I've really not had any chance nor inclination to do much machine knitting. But that doesn't mean I haven't been busy. We're having our first ever scarecrow festival this weekend, thanks to the local WI, so I've been busy putting that together. Pictures to follow - hoping that the weather is kind next weekend, though luckily the main body is bubble-wrap and newspapers inside plastic bags, so it is kind of waterproof. 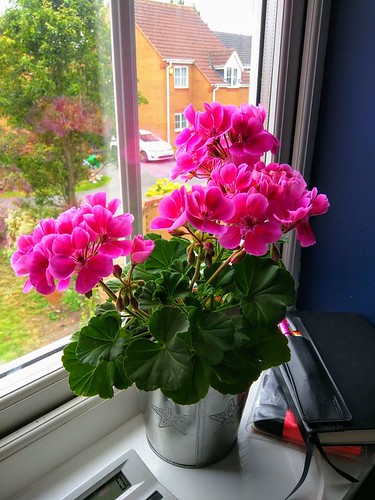 Can't remember if I shared a shot of the geraniums I picked up for £2 in Sainsburys at the start of lockdown. It was the last one in the shop, with only one solitary flower, and I nearly finished it off with lack of water in the first week. Turns out, a splosh a day seems to keep it very happy! All of these flowers have since faded and been removed, and it is blooming again today. I love this colour!
I am really missing the office banter lately. Owing to one person being on holiday for the last fortnight, the casual morning chat has died a death because the other people invited are all too busy to participate. Cynical me wonders how we ever got anything done before lockdown with all the casual chat that went on?! Or is it just that I'm the only one makes the effort to stop and chat with folks, because I feel my connections are eroding away from lack of use? Emails are all well and good, but you can't beat tone of voice (nor facial expression) for a proper conversation. 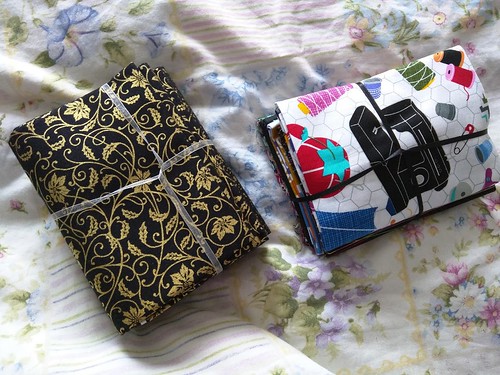 So anyway, we popped into town on Saturday for a bit of retail therapy. I put an order in with Rugby Unwrapped to collect on the way back. I picked up some camo fabric to make some shorts for G, and these two packs of fat quarters from Mo's Fabrics. The second shot didn't come out, but there's some fabric with "keep calm and sew on" in there, one with buttons all over, black fabric with coloured stripes and black fabric with musical notes on it. Might make some more "fat quarter" tops with them. I also picked up a bunch of music magazines, am desperate for new printed matter to read. Library books have been returned via the side hatch, the library itself is not yet open for books alas. 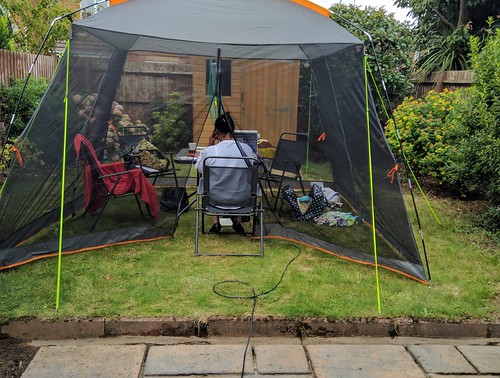 Last week I picked up a gazebo at Asda of all places - I was actually looking to replace our sunloungers, but the whole country seems to have sold out of those. As you can see it's large enough for socially-distant sewing, as long as it doesn't rain too hard. It's still up today - my friend W and I finished at 4pm, when the heavens opened and that was it for the rest of the evening, so I am hoping it dries out enough today so I can take it down (unlikely, the weather's set for showers). I'd hoped to cut out a few tops and the shorts, but W really wanted to have a go making facemasks, so that's what we did. I made an adult one that I gave to her, and another one with bees on (and managed to get the bees upside down, bah!). Still, it was nice to catch up with a live human that isn't the Cog.
Current mood:

Email ThisBlogThis!Share to TwitterShare to FacebookShare to Pinterest
Keywords: sewing