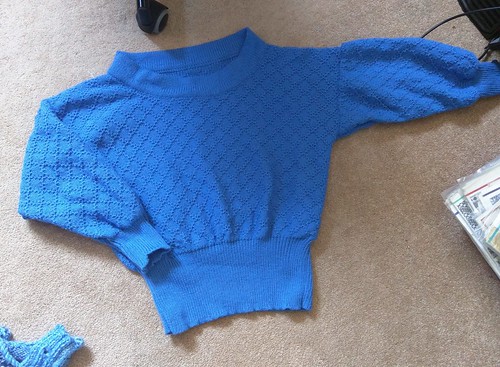 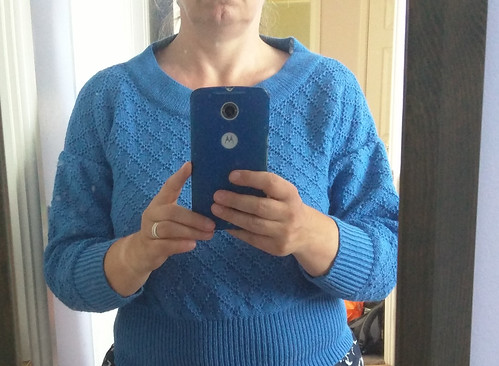 Well, the cut and sew neck came out a bit of a weird shape, and I made the tubular knitting too deep methinks. The garment itself is a bit of a weird shape. That aside, I'm quite happy with it, and the "passap" neck was surprisingly easy once I realised going from 1x1 to circular left holes that would show my scruffily sewn edge. Did the whole neck in tubular instead.

Having asked a few daft questions on Ravelry (and reading up a LOT of old Irene Krieger articles - I'm using lockdown downtime to have a serious purge of a lifetime of machine knitting magazines I inherited from someone), it appears the selling point of "no weights needed when knitting" is purely a UK phenomenon. I think from now on I will use a comb weight - I was lucky enough to get some green 5mm ribber combs on Ebay some years back - though I am at a loss on how to cast on with them on the single bed. I know I did it once (you actually hold it under the machine and knit through it, without strippers) but memory fails me.

The garment is supposed to be a small female jumper, I did not make it with a particular person in mind, it was just to get a feel for knitting with the Passap again. It fits me, and it really shoudln't, but, oh well!

Next projects are a test knit for a Ravelry friend, again on the Passap, and to have a go at a DBJ blanket I think. But the UK is sweltering in a heatwave today, so even just thinking about knitting is making me feel hot...

Regarding the lockdown, the UK government seems to have given up on even attempting getting on top of the virus before the UK economy completely tanks, so caution seems to have been thrown completely to the wind. We should probably all just hurry up and catch it and die / get immune as quickly as possible so that we can all get back to work. Wishing we'd had a government with the sense of the New Zealanders.

My partner has just come back from a cycle into town. Santander seem to have decided it's too much hassle to maintain their ATMS, so making deposits has been greyed out on the ATM for weeks (we tried week 3 too, I posted that cheque in the end as the restricted opening hours just didn't suit as we were both still working at that point) - thus today the Cog has had to go in to bank a cheque he received that he really did NOT want lost in the post as it was for quite a large amount. The website for each branch also states "deposits cannot be made outside of banking hours" - the irony being, the member of staff who served him clearly did not know this and said "It should be working!". We tried both his and the joint account and no dice (no cash deposits, either!). Ironically enough, cash has become a dirty word here, so I doubt many people are taking much OUT of the ATM. Well done, Santander - force people to take unnecessary risks where they didn't need to. How hard is it to put some envelopes into the ATM occasionally?

He came back fuming at the lack of social distancing in our local Co-Op - it's tiny, and has a clearly marked one way system. Everyone has decided it's all over - they linger over every decision. I hate to sound petty - normally I couldn't care less how long it takes you to choose a bottle of wine, but then normally I would brush past you and let you cogitate. It's a supermarket, not a museum - I guess it's still the only "day out" for a lot of us. I do not think the virus is done with us, alas.

My social circle seems to contract by the day, but more because it's just difficult. I have nothing exciting to report, and they likewise. I support the Black Lives Matter movement, but so far all it has meant for me is that I have unfriended and blocked a few people who were "friends" on Facebook - by friends, these are people I considered friends in past jobs and past times. I'm not entirely sure blocking them is the best idea, but I really don't want their rightwing rubbish on my feed. What can I say? Maybe the hot weather is making us all cranky! I suspect I may need to crack on and sew some more shorts, because the ones I am wearing will need to go into the wash soon! Sewing summery things seemed to cause rain and cold last time so perhaps it's just the thing! :D

hot and peevish
Posted by steel breeze at 6:49 pm

The jumper has a lovely shape, with an elegant neckline. Can see you paring that with one of your skirts, or there may be a new skirt in the offing.

Aw, thanks! It was just a test knit, though it's fully finished and everything :)