Pootling about on the Passap

Well, well, August already! The good news is I was given clearance by my neurologist to drive again at the beginning of last month. The down side is I'm out and about already (and £964 poorer, ouch!) so there's less time to craft. It's so nice to have my independance back, and the car is now squeaky clean too, inside and out. It cost £55 for two thirds of a tank of petrol, £55 never used to even fit in the tank before. Yikes! The only positive is it will take longer to run down as we're still WFH a lot. 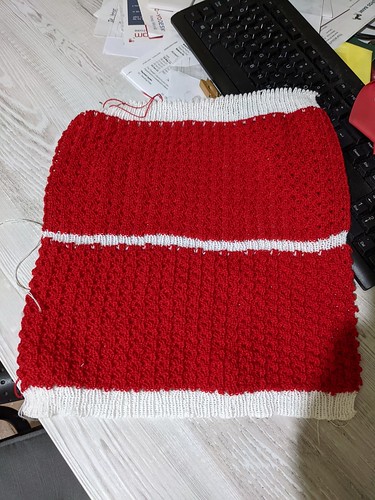 Anyway, there was a Passap pattern called "Tangerine Dream" in MKM a few months ago, a very simple Tshirt type top. The pattern asks you to program in a simple checkerboard tuck stitch pattern, but I decided to be lazy and swatch two likely candidates from the pre-programmed ones instead, using a cone of red 4ply I happened to have hanging around. As luck would have it, the first swatch is pretty much to tension, the second was pretty close but I liked the first better in terms of texture. The tension was close enough anyway - I doubt I'll be wearing this as acrylic isn't my most favourite fibre to wear. So far I've managed to knit the back, with only a few oopsies. When you program the Passap at the start, you tell it to pattern over (for example) 70 stitches. Totally forgot that once I'd started the armhole increases that the pattern width would need to be expanded. Also I'm a bit vague on the needle rule - this pattern does alternate tucking EON on the front bed, and the back bed always knits, so I added an extra needle on the back. Actually I'm not sure that it made much difference, but there are a few dropped stitches on one edge to rectify when I seam it. The front is a bit trickier, because you have to cast off the front neck, and remove one shoulder from the machine whilst knitting the other one and then rehang and reset the pattern. No holding position on a Passap! That's a task for next weekend. I will edit this post when I've checked my notes and tell you which two techniques I swatched. They are lovely and squooshy and perfect for blankets. The top will be sewn up and the edges finished with crochet.

Next weekend (Saturday 13th) we're running our second, and possibly last, machine knitting event at the Alexandra Arts cafe in Rugby, 2pm 'til 4pm. £1 to park next door in the multi storey carpark (which is alas cash only). COVID seems to have made lots of folks reticent to travel, and I can quite understand that - it's such a pity though, it was a fun group. We're not going to attract younger people to the craft of machine knitting if we can only meet during working hours alas. If I didn't work I'd be attending the Long Buckby group, they are much better organised than I am! So I am not sure if it has "legs" any more. Ditto the Coventry knit wits - there are only four regulars now, two of us live in a different town, and we all struggle to get there after work sometimes. I do still get interest via Facebook, but the people rarely show up. I *think* there is still a Sunday afternoon group at the same venue (Golden Cross pub) but I am not certain.

Alas, some local oiks had already vandalised the postbox topper within a day of my taking the photos in the last post. I had to reseat the athletes - they actually have large bolts up their legs to help them stay upright, with big plastic "washers" on the underside of the main part, and luckily they are also sewn down in places. What anyone wanted with kebab skewers and a tiny tennis racquet is beyond me. I never went around destroying things as a teenager, I was too busy listening to music, climbing trees, making things and studying. Mental note, don't add props, the local kids can't resist them. I think the next theme is harvest festival, so props may be a moot point.

Great news and great work on the Passap !