Inspired by Crazy Aunt Purl (she's got a book coming out, y'all!), I figured it was about time I did an "About me" post... 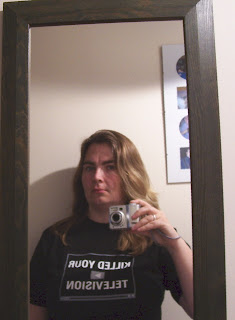 ...complete with "taken in the mirror" photograph. Enjoy looking at this hair - it's getting cut tomorrow! Sigh! The t-shirt is from Diesel Sweeties, a very funny cartoon.

I'm a thirty-something knitter who was taught to knit when I was around 8 or 9. Actually, I think my mum taught me to crochet first, and I took to it like a duck to water. I knitted no end of things for the doll's house, plus a "pin on the noticeboard" organiser for pens and pencils with navy acrylic.

Later on came knitting. I think I may (with her encouragement) have bought a "knitting kit" at a local school bazaar - half an eggbox, with six balls of brightly coloured wool and some plastic needles. Thus began the scarf that never ended!

I knitted and crocheted on and off throughout my school years, sometimes with more success than others. I made fingerless gloves for all my friends. I made a knitting bag out of different stitches, and my first awful attempt at fair-isle - acid pink and green mohair people, on a peach acrylic background. Tighter than an italian waiter's trousers. I distinctly remember walking around school, crochet hook and work in one hand, yarn in my armpit, soliciting and ignoring the surprised looks from other students. Well, I was always decidedly out-crowd, at a school which at that point recognised sporting abilities over artistic ones.

Left school and got a job, crafting took a back seat, except for the odd tapestry and embroidery. Fast-forward to, I dunno, the mid 90s, and an ex, tidying out his attic, gave me his estranged wife's knitting machine, a Brother KH830.

I didn't actually open it until after we split up - one of my precious cats Fraggle went missing. It had no manual or punchcards, but a kind lady in Doncaster photocopied hers for me. Threw myself into learning this weird machine. As it turned out, Fraggle had thrown himself into the path of a car. :(

A house-move or two later, and the machine drops by the wayside, with nobody to knit for, and no space to assemble the machine. Then my sister started sprogging, and my nephew grew out of his first things. Got the machine out, got it serviced, gained a few more!

The non-knitting part of my life? I'm the eldest of two girls, born in the Midlands UK, working full time as a CAD engineer and animator for a large conveyor company. I live with my partner of five years, hereafter known as G, "The Cog" or, after a particular dopey act, "honorary blonde". We have one cat, and far too many spiders.

And the rest, as they say, is history.

I also have far too many spiders.

Yep - I DEFINITELY like your style.
Why do our beloved moggies DO that ?!